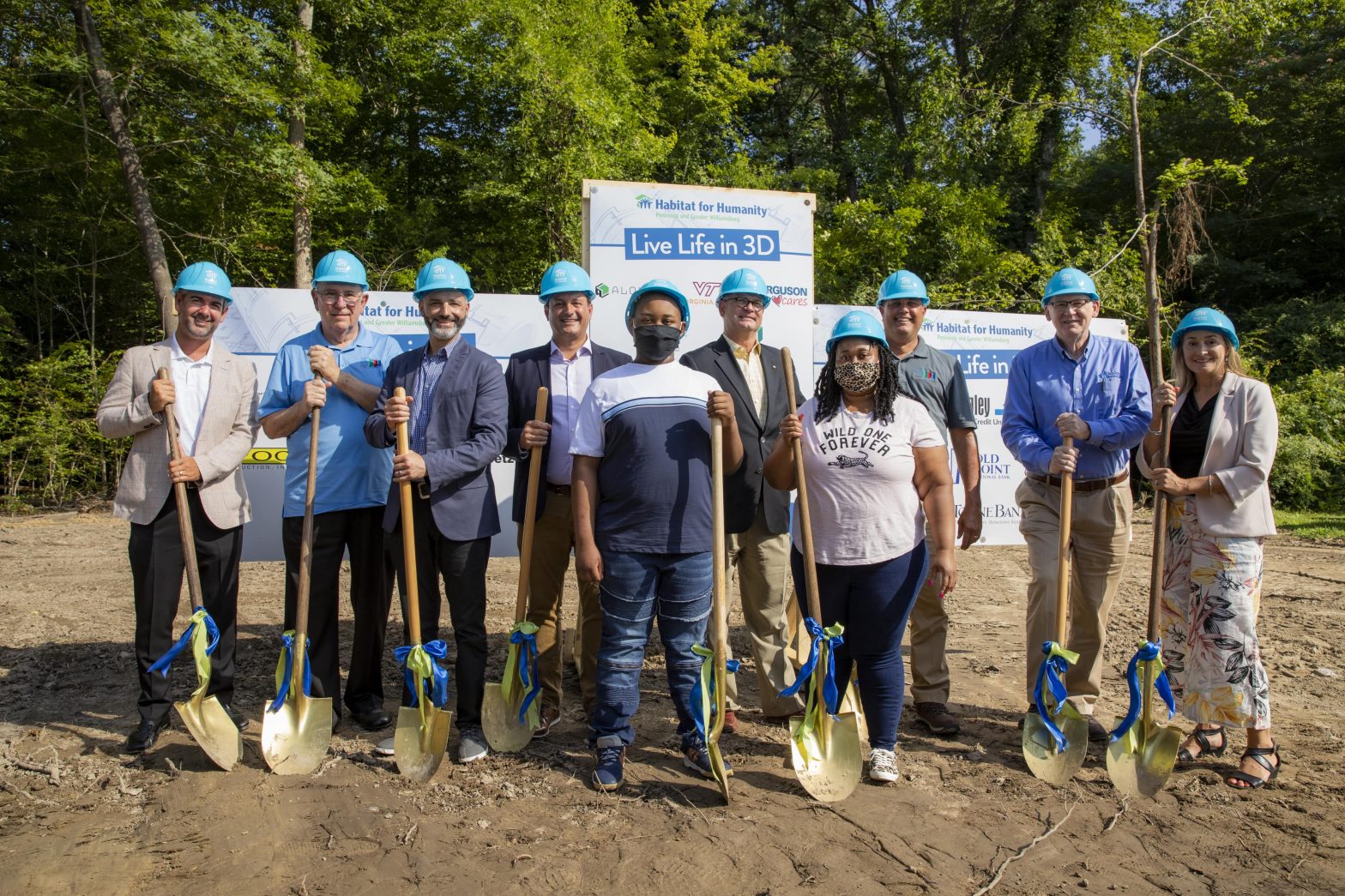 Underneath a blue hard hat and carrying a shovel, April didn’t expect to cry on Monday morning.

Sometimes tears flow when you achieve a milestone, and standing next to her 12-year-old son, that’s exactly what happened for April, thanks to the help of Habitat for Humanity Peninsula and Greater Williamsburg.

The nonprofit, its regional partners and state supporters gathered alongside April and her son to break ground on a new home that also represents a first on the East Coast.

The 1,200 square-foot, three-bedroom house in Williamsburg will become the first Habitat 3D printed house East of the Mississippi River. It is only the second Habitat home in the nation to be constructed using 3D technology, which is anticipated to speed up the building process, reduce the price of construction and lower energy costs.

The family is expected to move by the end of the year.

April, who grew up in Surry County, has worked at a local hotel for the last five years and sometimes juggled as many as three jobs to stay financially afloat. She improved her credit with the help of Habitat so that she could purchase the home and looks forward to a backyard for her son, a fan of mixed martial arts and superheroes.

“I’m excited for all of it,” April said, unable to hide her dripping tears. “I just can’t wait.”

The celebratory ground breaking ceremony started with Janet V. Green, CEO of Habitat for Humanity Peninsula and Greater Williamsburg, introducing April and her son to a crowd that included Sen. Monty Mason (D-Williamsburg); Michael J. Hipple, chair of the James City County Board of Supervisors and one of Williamsburg’s most respected builders; and several future neighbors.

Habitat has built multiple homes in the neighborhood where this 3D house will be printed.

“We are building this home with April, not for her,” Green stressed. “Everything we do is in partnership with our families.”

All Habitat homes require the homebuyer to put in at least 300 hours of what’s called sweat equity toward building their home or nearby homes. Homes are purchased with a zero-interest equivalent, 15- to 30-year mortgage that is no more than 30% of the buyer’s income.

The uniqueness of this home is how it will be constructed.

The concrete walls will be printed by Alquist, a 3D printing construction company, which, like Habitat, is committed to providing affordable housing to families.

With lumber prices soaring due to the COVID-19 pandemic, Habitat partnered with Alquist for this innovative project, technology that will help reduce the cost to build homes by 15% per square foot as compared to conventional methods.

Alquist Founder and CEO Zachary Mannheimer said Habitat for Humanity and his company share a goal — the American dream of home ownership.

“We hope this is the first of many homes that we can be doing along with Habitat here in Virginia, here in Williamsburg and many other places,” Mannheimer said.

Printing of the home’s walls will begin the first week of August and can be watched live on the Habitat for Humanity Peninsula and Greater Williamsburg Facebook page.

“Welcome to your new home!” Mason said to the family during the ceremony.

And to the many partners that have come together to make this innovative project possible, Mason added, “You all are really contributing to the community and to the environment and to the future of what home building may be.”

FOLLOW US
We TOPPED off the 3D printed house this morning! W

Thanks to the work of our team and volunteers, the

Want to know why working at the Habitat ReStore in

On this World Habitat Day 2021, we salute you, Joh

More than 30 years ago, the United Nations General