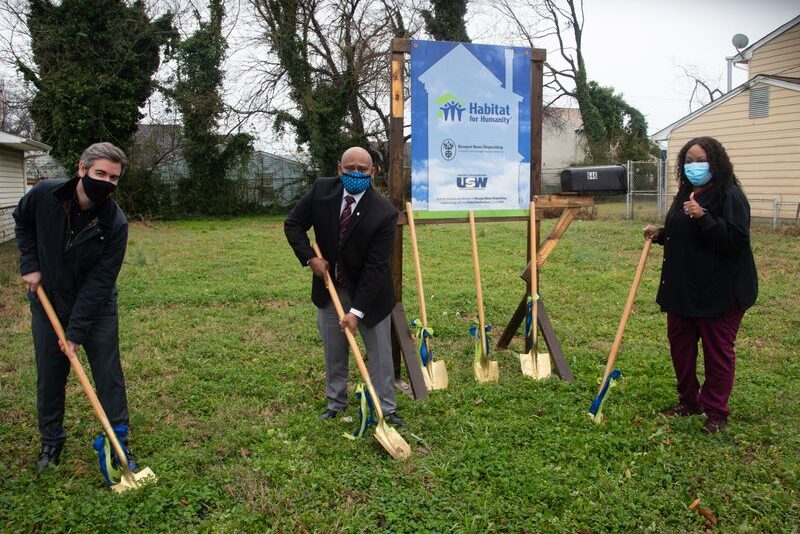 NEWPORT NEWS, Va. (March 1, 2021) – Huntington Ingalls Industries’ Newport News Shipbuilding division today hosted the groundbreaking for a new home that will be built in partnership with Habitat for Humanity Peninsula and Greater Williamsburg.

Adhering to COVID-19 protocols, a private gathering was held at the site of the 19th build project to be undertaken by Habitat and shipyard volunteers since the collaboration began in 2002. Attending the socially distanced event were Newport News Shipbuilding representatives, Habitat staff and the future homeowners, Mickeia Hunter and her sons, 18-year-old Cinque and 7-year-old Nehemiah.

“It’s been nearly 20 years now that our shipbuilders have partnered with Habitat for Humanity Peninsula and Greater Williamsburg to build these homes that provide families a place where they can feel protected and secure,” said Xavier Beale, vice president of trades for Newport News, who is the executive sponsor of the project.

“At Newport News Shipbuilding, we know a thing or two about building with security in mind, and like the ships we’ve built for over a century, these homes are built with our hands and our hearts,” Beale said. “We look forward to working with Habitat and the Hunter family to build a home they can be proud of.”

A photo accompanying this release is available at: https://newsroom.huntingtoningalls.com/file/nns-habitat-groundbreaking.

The three-bedroom, 1,200-square-foot home will be built in the city’s Southeast community on land donated by the Newport News Redevelopment and Housing Authority.

“Mickeia Hunter’s father, Mickey Pittman, just retired from the shipyard, so the family sees it as fate that the shipyard is partnering on this project,” said Janet V. Green, CEO of Habitat for Humanity Peninsula and Greater Williamsburg. “The Hunters are a particularly close-knit family that have overcome so much adversity, and still have the drive and dedication to move forward and improve their circumstances. In their new home, the Hunters hope to continue their strong bond as a family and create new memories for decades to come.”

Habitat for Humanity Peninsula and Greater Williamsburg is a non-profit organization serving the cities of Hampton, Newport News, Poquoson and Williamsburg and the counties of Charles City, James City, New Kent and York. For more information, visit www.HabitatPGW.org.

Huntington Ingalls Industries is America’s largest military shipbuilding company and a provider of professional services to partners in government and industry. For more than a century, HII’s Newport News and Ingalls shipbuilding divisions in Virginia and Mississippi have built more ships in more ship classes than any other U.S. naval shipbuilder. HII’s Technical Solutions division supports national security missions around the globe with unmanned systems, defense and federal solutions, and nuclear and environmental services. Headquartered in Newport News, Virginia, HII employs more than 42,000 people operating both domestically and internationally. For more information, visit:

• HII on the web: www.huntingtoningalls.com

FOLLOW US
Habitat for Humanity Peninsula and Greater William

Want to build HOPE? Together we can! Support us to

Thank you, GIVE LOCAL 757, for creating the local